Navy veteran Michael did not have an easy transition when he returned home from service. At the beginning of 2020, Michael was diagnosed with stage three oral cancer. He quickly underwent surgery and multiple rounds of chemotherapy to successfully remove the cancer. The nature of this life-altering diagnosis made it even more difficult for Michael to reintegrate into the community. The surgery required part of his tongue and some of his teeth to be removed, creating an uncharted territory of learning how to talk and interact with others again. Not surprisingly, he said it lowered his self-esteem. He would apply for jobs and back out when he was called to the interview. On top of that, he experienced chronic pain from a blood clot in his leg that made it hard to stand beyond a few minutes.

With the help of the Veterans Administration (VA), Michael was referred to Samaritan House on Lawrence Street when it became clear that Michael could not afford housing. MIchael said that these moments of struggle were a grace from God telling him that he needed to slow down and take care of himself. The veteran services team at Samaritan House offers support groups and case management services to help those who have served our country with the dignity they deserve.

Michael says that the first words out of his caseworker's mouth were, "’Take care of yourself and your health first, we will find a place for you.’"

He worked with his assigned wellness consultant on speech therapy and with his caseworker on interview skills. He shared that some days he would just sit and cry in frustration, trying to get the right words out, but that it helped build up his confidence to put himself back out into the workforce. Tears of joy came one day when an affordable housing opportunity came that would allow for his daughter to live with him as his caregiver.

“God gives us strength. I found courage through my time at Samaritan House,” said Michael.

Today, he has a lot to celebrate, including safe and secure housing in downtown Denver and his daughter’s high school graduation. The two plan to celebrate seeing his favorite team, the Las Vegas Raiders, in the coming year. 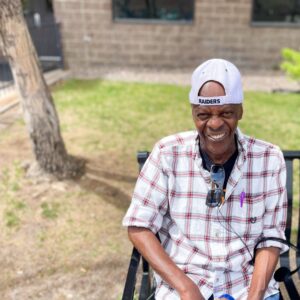 Posted in Faces of Hope